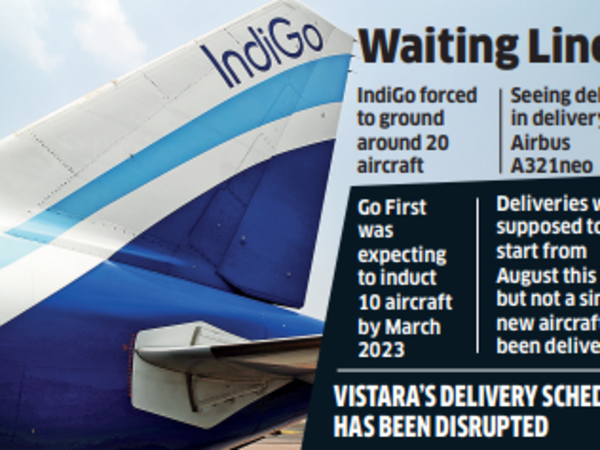 A global shortage of aircraft engines and spares is threatening the expansion plans of several Indian airlines which were preparing for an expected robust recovery in air travel in the upcoming festival season, according to industry executives.

This, said airline executives, may push up air fares in the October-January period even though the floor and cap on fares has been removed by the government.

Supply chain bottlenecks for engine makers Pratt & Whitney and CFM International, which manufactures engines for aircraft such as Airbus A320 Neo and Boeing 737, is forcing airlines to ground aircraft and delaying induction of new planes, said people familiar with the matter.

Market leader IndiGo has been forced to ground some 20 aircraft as supply of spare engines by US-based Pratt & Whitney has fallen behind by at least two months, the people cited earlier said. Indigo, which is operating around 1,550 flights per day and is expected to boost its capacity from October, is struggling to do so as delivery of new aircraft, primarily the higher capacity Airbus A321 Neo, has been delayed by about 30 days.

The airline, which was returning aircraft older than six years, has now decided to hold on to them for a longer period in the face of the shortfall.

“IndiGo is looking to extend the lease period of some older A320 Neo by two years and is also contemplating to lease older aircraft from the secondary market to cater for the shortfall,” said a person briefed on the matter. “This is not a favourable scenario but the shortage is being felt by all airlines.

A spokesperson for IndiGo said that supply disruptions across the globe are causing some delays in deliveries.

“We are adjusting our fleet plans and lease returns to ensure minimal disruptions in our future capacity,” the spokesperson said. “This has been the first year after Covid with a strong recovery in travel and we expect this to continue into the festive season. We are very optimistic about the revenue generation in the third quarter as booking trends remain strong.”

Airline executives warned that as supply is likely to lag demand, air fares during the festival season could shoot up. Healthy yields for airlines are likely to sustain in FY24, given the limited capacity additions for Indian airlines, analysts at brokerage firm Kotak Securities pointed out.