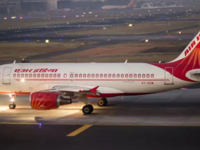 An Air India flight on Wednesday was evacuated after smoke started billowing out of the flight at Muscat International Airport.

All passengers were evacuated on slides after smoke started coming out of the passenger plane. The incident happened while the aircraft was on runway preparing for take-off at Muscat.

“All passengers were safely evacuated after smoke was detected in engine no. 2 of Air India Express flight (to Cochin) on the runway at Muscat airport. Relief flight to be arranged. We will investigate the incident and also take appropriate action, ” ANI quoted the DGCA as saying.

In a statement, an Air India Express spokesperson said there were 141 passengers onboard the plane, which was to depart Muscat at 1120 hours (local time).

“While it was on the taxiway, another aircraft reported observing fumes from one of the engines. However, there was no fire warning indication in the cockpit. As a matter of abundant precaution, and following the prescribed SOPs, the crew stopped on the taxiway and activated the onboard engine fire extinguishers,” the statement said.

Air India Express also said the matter is being investigated by the regulatory authorities as well as the airline’s flight safety department.

A senior official at the Directorate General of Civil Aviation (DGCA) said the regulator is probing the incident and appropriate action will be taken after the investigation is completed.

Air India Express said full support was extended by Muscat Airport authorities and the passengers were brought to the terminal building. There are no major injuries reported, except minor bruises to some passengers while evacuating.

An official at the Cochin International Airport Ltd (CIAL), the engine of the Air India Express’ Boeing plane had caught fire at the Muscat airport before taking off for Kochi at 1250 hours (IST).

The official noted that due to the incident, Air India Express flight IX475 from Kochi to Doha has been delayed.

As per the latest update provided by the CIAL official, the rescheduled IX442 flight from Muscat will arrive at Kochi at 0230 hours (IST) on September 15 and later leave for Doha as flight IX475 at 0315 hours (IST).

A few months back, an Air India Express aircraft VT-AXX operating flight IX-355 (Calicut-Dubai) was diverted to Muscat as during cruise, a burning smell emitted from one of the vents in the forward galley, news agency ANI reported citing the Directorate General of Civil Aviation.